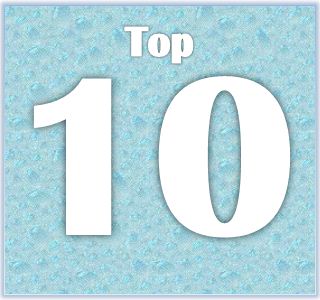 This week's list is the Top Ten Words or Topics that instantly make me pick up or buy a book.

I found this was quite a challenging list for me. I don't focus on a particular genre or sub-genre, and I can't think of a single keyword that would generate that *must buy* feeling. I like to vary my reading quite a lot, so I try to read new things, new authors a lot of the time. So, here's my list, make of it what you will.

Any book from a sequence that I'm following.

Given the current trend in publishing this means rather a lot of series. The sequences I'm currently reading are:

The Gentleman Bastards - Scott Lynch, book 3 due sometime soon, plus 2 prequels announced, though no dates available yet.
In Death - J.D. Robb, book number 37 due out later this year.
Thursday Next - Jasper Fforde, I think this may have concluded now with 'The Woman Who Died A Lot'.
Nursery Crime - Jasper Fforde, It's been years since The Fourth Bear, so I don't know if there are any more anytime soon.
A Song of Ice and Fire - George R.R. Martin. I haven't finished the first book yet, but if number 8 was published tomorrow I'd buy it and line it up with the others.
Sookie Stackhouse mysteries - Charlaine Harris.

Any book by a favourite author whose work I collect.

All the authors above, of course!
Anything written by Nora Roberts. I've been collecting her work for years, can't stop now!
Neil Gaiman
Sir Terry Pratchett

Recommended by someone whose opinion I trust (who I know in real life).

Especially when I've heard good reports from a number of trusted people.

Recommended by someone whose opinion I trust (who I don't know in real life).

This is an important distinction when you're valiantly trying to make up the numbers to get to 10.
This group would include other bloggers reviews, and also recommendation engines used by Goodreads/Amazon, though I tend to give priority when the average rating is 4 stars or over.

Chosen by my book club.

Our club 2nd anniversary was on Thursday last week, and I haven't missed a book yet (though on a handful of occasions I wish I had).

Recommended by my favourite bookshop.

Especially when it's a recommendation given during a Mr B's Book Spa, as then I know it's entirely personalised. They know me, and my tastes.

I know I'm stretching the boundaries of the list again, and moving away from Fiction, but when I was looking for an instruction book for my model of DSLR camera I had a very specific set of requirements and keywords.

I think that's all I have for you today. Please leave a comment and a link to your list so I can see what I forgot to include :-)

EDIT:  Having read quite a few other blogs now, I can see I missed loads...

Time Travel, Dystopian etc...  Looking through some of the other blogs on the hosts site I have added quite a few ideas to my wishlist.
Posted by Lorraine at 00:30

Email ThisBlogThis!Share to TwitterShare to FacebookShare to Pinterest
Labels: TTT